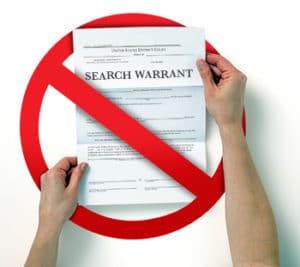 When police conduct a search, the general rule of thumb is that they need a warrant in order for it to not intrude on your Fourth Amendment rights. However, there are a handful of exceptions to this rule, which allow police to conduct searches without having to go through the process of getting a warrant. In the eyes of law enforcement, these exceptions allow police to gather evidence before it can be moved or destroyed. However, they can also be used to harass innocent people and can lead to criminal charges.

Search Incident to an Arrest

Anytime a police officer makes an arrest, they are allowed to search the arrestee for evidence and for weapons. This includes that person’s pockets and anything within arm’s reach, but exactly how far the search can extend away from the arrestee is an issue that courts are still figuring out.

When police have to take immediate action in order to prevent evidence from being moved or destroyed, or are responding to an emergency, then they are not obligated to rush to a magistrate first to get a warrant. For example, if gunshots are heard inside a house, police do not have to get a warrant to enter the building before they can rush in to rectify the situation. Similarly, if police are in the heat of a foot chase with someone who has committed a crime and the suspect runs into a house, then the police do not have to get a search warrant to follow him – they can rush right in to try to make an arrest.

Another exception to the warrant requirement exists when police see evidence of a crime while standing in a place where they are lawfully allowed to be, like a sidewalk. For example, if police are walking in a public park, and they see marijuana plants through a window, then they can search the property without a warrant.

Similar to the “plain view” exception to the warrant requirement, police can conduct a search in any land on which you do not have a reasonable expectation of privacy, like a vacant lot.

Finally, police can perform any search that they want to, if you have given them permission to do so. Worse, if law enforcement has your consent to perform a search, it does not matter how illegal or unconstitutional that search is because you have given your consent. Because it gives them so much power, this is one of the most common types of warrantless searches that police perform on a daily basis.

Knowing your rights before you encounter the police can mean the difference between carrying on with your day and being the victim of a warrantless search that leads to a criminal charge.

If you have been indicted for a federal crime, contact The Federal Criminal Law Center online for legal representation both in and out of court.