In a move many are viewing as a sign of changing views regarding the Second Amendment, the U.S. Supreme Court on Monday refused to hear a legal challenge to an assault weapons ban ordinance enacted by Highland Park, IL (a suburb of Chicago), the New York Times is reporting.

The case in question, Friedman v. Highland Park, challenges the constitutionality of a law passed in 2013 by the Highland Park City Council which prohibits buying, selling or owning certain types of semiautomatic assault weapons and large-capacity magazines. The case, brought by pediatrician Ariel Friedman (with the Illinois State Rifle Association named as co-plaintiff), claims the law violates Friedman’s Second Amendment rights to use a semiautomatic weapon to protect his home. The refusal of the Supreme Court to hear the case leaves the city’s weapons ban intact.

While the Supreme Court only hears approximately one percent of the cases it is petitioned to consider, this decision is being interpreted by some as a possible departure from the trends established in landmark cases D.C. v. Heller (2008) and McDonald v. Chicago (2010), in which the Court upheld challenges to handgun weapons bans in these two cities. In the first of these two cases, the Court decision included an affirmation that the Second Amendment is not without limitation, which may have opened the door to more ambiguous legal questions as to what the Second Amendment does and does not allow. It may be this ambiguity that has fueled the Court’s apparent change of direction in Friedman v. Highland Park.

Two Supreme Court Justices wrote dissenting arguments on the Court’s refusal to hear the case. Justice Clarence Thomas wrote, “Roughly five million Americans own AR-style semiautomatic rifles…The overwhelming majority of citizens who own and use such rifles do so for lawful purposes, including self-defense and target shooting. Under our precedents, that is all that is needed for citizens to have a right under the Second Amendment to keep such weapons.”

The issue of gun control has seen a fresh wave of debate and controversy among the public recently, fueled by several high-profile mass shootings in recent months—most recently, the killing of 14 innocent people in San Bernardino by a husband-and-wife team who are now being identified as ISIS sympathizers. One can only surmise that at some point the Supreme Court will have to address this question more directly in future cases. 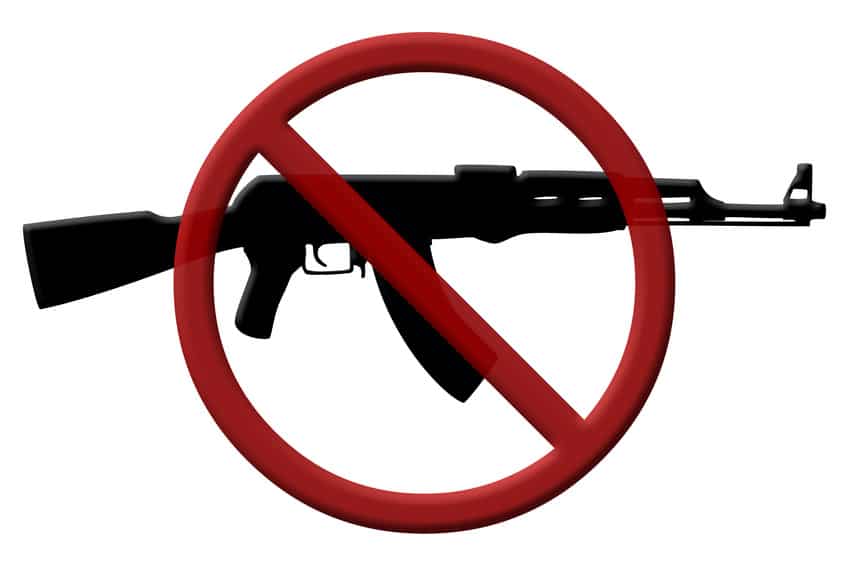 Last week, the U.S. Supreme Court agreed to review the case of Voisine v. United States, according to the SCOTUS blog. The case could have far-reaching ramifications pertaining to firearms possession and the Second Amendment.

The case is being brought by two defendants from Maine, Stephen Voisine and William Armstrong, both of whom were convicted on federal firearms possession charges for unrelated incidents. The federal law in question is the Lautenberg Amendment, which prohibits people with prior convictions of misdemeanor domestic violence from owning a gun. Voisine and Armstrong are contending that their domestic violence convictions under Maine law should not have disqualified them from owning weapons because Maine classifies certain actions as domestic violence that are more reckless than intentional.

According to documents submitted to the Court, Voisine was charged with domestic violence back in 2003 for slapping his girlfriend while drunk. Armstrong’s conviction in 2002 stemmed from pushing his wife against a wall during an argument. Authorities became aware that Voisine owned a gun in 2009, Armstrong in 2010. Both were convicted under federal law on the grounds that their prior domestic violence convictions prohibited them from owning firearms. The defendants are appealing their convictions on the grounds that Maine’s definitions of domestic violence and simple assault are too broad for the Lautenberg Amendment to apply automatically. They are also contending that the firearms ban for those convicted of domestic violence is a violation of their rights under the Second Amendment in general.

The First Circuit Court of Appeals upheld the convictions of Voisine and Armstrong and rejected their arguments; however, the U.S. Supreme Court has agreed to review the case, which should appear on the dockets in late February or early March 2016.

Interestingly enough, the Justices have decided not to consider the Second Amendment question raised by the case (i.e., they will not rule on the legitimacy of the Lautenberg Amendment). They will, however, review the question of recklessness, as to whether the convictions of these defendants under Maine law should actually have disqualified them from weapons ownership. While this will no doubt leave some gun rights advocates disappointed, it still could have far-reaching ramifications as to how state and federal laws interact, and in what ways federal laws can or cannot overrule the laws of individual states regarding domestic violence and gun ownership. It will be interesting to see how this case transpires.