This week, the U.S. Supreme Court is hearing arguments in the case of Foster v. Chapman, a sticky case that delves into the murky waters of racial profiling during the jury selection process, NPR reports. 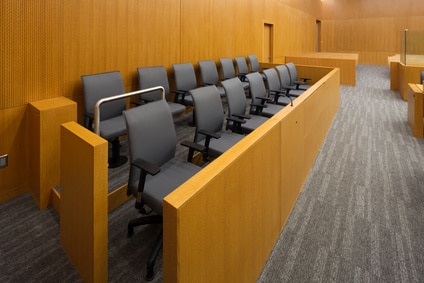 At issue is the right of attorneys on both sides to use “peremptory strikes” to disqualify potential jurors during the selection process. In theory, this means the attorney can decide against a juror without offering explanation or justification; it’s a right whose intent was to protect the clients against possible bias from the jury, and has in fact protected many defendants over the years. However, when subtle or not-so-subtle prejudice comes into the selection process for jurors, it can actually have the opposite effect, creating a biased jury. That is the issue the Supreme Court will consider in the case of Foster v. Chapman, in which an 18-year-old black man was sentenced to death for killing a white woman. In this case, the prosecution used four of its nine peremptory strikes to remove all the prospective black jurors from the pool, causing the black defendant to be tried and convicted in front of an all-white jury. The defense cites this and other evidence in which the prosecutors allegedly sought to tap into the possible prejudices of the jurors.

This isn’t the first time the Supreme Court has tackled this issue. Back in 1880, in the case of Strauder v. West Virginia, the Court ruled it unconstitutional to exclude a prospective juror solely on the basis of race. Over 100 years later, in Batson v. Kentucky, the Court clarified this further by detailing a three-step process by which peremptory strikes could be tested to determine whether race was an issue.

While it’s obvious that with these rules in place no attorney would dare overtly exclude a juror on the basis of race, the overall premise here is that prejudice often finds away around the rules. The defense in this case is arguing that despite the prosecution’s neutral explanations for its peremptory strikes, there is evidence that the prosecutors found a way to bypass the tests set in place by Batson v. Kentucky and deliberately excluded black jurors for racial reasons. In part, the Supreme Court is now tasked with determining not only whether racial discrimination took place in the jury selection in Foster’s trial, but whether there needs to be further clarifications to help deter racial profiling in the jury selection process.

According to NPR, a group of high-profile prosecutors across the political spectrum have filed a friend-of-the-court brief in this case, definitively siding with Foster on this issue. “Numerous studies demonstrate that prosecutors use peremptory strikes to remove black jurors at significantly higher rates than white jurors,” the brief states. It will be interesting to see whether the Supreme Court takes this opportunity to strengthen protections against minority defendants by clarifying jury selection rules further.