Here in the U.S., most of us live under multiple governmental jurisdictions (local, state and federal), and most crimes are prosecuted in either state or federal court. This can be confusing for the defendant charged with a federal crime. What, exactly, makes your crime a federal offense, rather than a local or state offense? The reasons are a little complicated, but let’s try to unravel them here.

OVERLAP IN THE LAWS

How you are charged, and in what type of court you’re tried, is mainly a matter of jurisdiction—in other words, you’re tried under the set of laws you’ve allegedly broken. The problem is, the jurisdictions frequently overlap. The state in which you live has laws that make certain activities illegal; however, in many cases, the federal government also lists many of these things as federal crimes (most of these are enumerated in Title 18 of the United States Code). Thus, the crime you commit may easily be an offense at both the state and federal levels of government.

Now, if you’re accused of a crime that is only a state offense, you’ll naturally be tried in the state court where the offense occurred. But if the offense violates both state and federal law, the agencies will typically decide which jurisdiction will take the case. In most cases where there’s overlap, the federal government will defer to the state to try the case, but if circumstances warrant, the federal government may choose to prosecute the case, and you’ll receive a federal indictment. You’ll be tried at either the state or federal level, but rarely both.

WHEN DOES THE CRIME BECOME A FEDERAL OFFENSE? 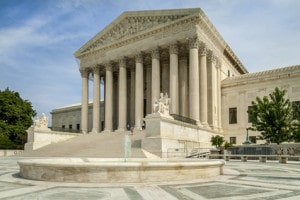 Sometimes, you simply won’t know until charges are formally filed whether you will be tried at the state or federal level. However, in some instances at which it is either mandated or likely that your alleged crime will be tried as a federal offense. Here are a few examples of when your case is most likely to be tried in federal court:

If your alleged crime is considered a federal offense, you may be facing more severe penalties than if you are charged at the state level (i.e., higher fines, longer prison time, and no parole). Thus, it’s important to have a criminal defense attorney who is highly experienced in the federal courts. For an initial consultation to discuss your federal charges and your options, contact the Federal Criminal Law Center today.