Brown v. Board of Education was a landmark Supreme Court case in which the Court unanimously determined in 1954 that the segregation of public schools was inherently unequal, and therefore unconstitutional. The rationale was that allowing segregation of the races in public education would automatically translate to African-Americans not having access to the same educational opportunities as white Americans.

The Court’s decision sparked much debate, a lot of chaos, and not a little violence, serving as the catalyst for the Civil Rights Movement that challenged segregation and discrimination in many other aspects of society, not just in schools. Over time, the positive effects of Brown v. Board of Education spread throughout the school system and into daily life, and with the Civil Rights Act of 1964, the “separate but equal” policies were abandoned.

HOW DOES THIS AFFECT MY CHILD’S SCHOOLING TODAY? 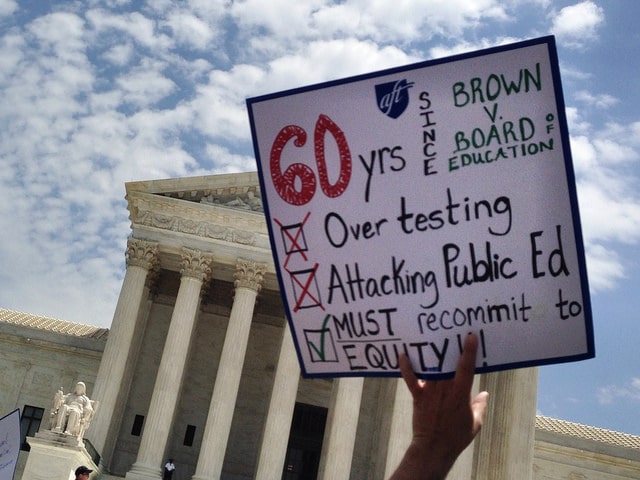 It could be argued that while desegregation is not enforced today as it once was, schools in general offer an improved education for both whites and African-Americans, and even in segregated schools, African-Americans may now receive a better education than they would have in the days before Brown v. Board. However, the whole idea behind that Court decision is that segregation breeds inequality, so the reality is that African-American schools are less likely to provide the same level of education than schools that are predominately white—usually due to financial discrepancies between them.

WHAT CAN I DO?

Theoretically, the laws established by Brown v. Board of Education are still in place, even though they aren’t as actively enforced. If you feel that segregation has significantly reduced your child’s ability to receive a good education, and feel you can provide evidence to prove it, you might want to consult with an attorney to determine whether you may have a case. For more information, call the Federal Criminal Law Center at 404-633-3797.